How delighted to be writing again almost after 5 months. I trust that our audience all over the globe have been abundantly favored by HASHEM, as you seek to achieve your important goals and expectations in this life.

It’s so good to be back in Abuja after being away for some while now. Completing one of my new books for aspiring and young entrepreneurs, as well as a recent business trip to South Africa- are eventually two things I’m grateful to HASHEM about on my behalf!

However, upon returning to the synagogue, I sat down to talk with Hezekiah concerning the just concluded teaching tour across six states in Nigeria. The success of the three months tour is a thing of joy for the entire synagogue, to see one of their sons making remarkable impact in several Jewish Synagogues around the country.

I started by asking him to briefly introduce himself for people who have no prior information about his personality.

Hezekiah Moshe is the chief kazan of Tikvat Israel Synagogue in Abuja, and also serving as Kazan in a number of synagogues outside Abuja. His father, Sar Habakkuk Nwafor, is the Rosh of the synagogue located at Kubwa town in the federal capital territory Abuja. Hezekiah is well known for his brilliant reading skills of the Hebrew language.

He’s one of the Nigerian Jews that benefited from the sponsorship of Kulanu to undergo 2 months intensive Hebrew studies in Uganda some years ago. Since then, he has continued to study more, seeking practical ways to train himself to become an outstanding Jewish scholar. Currently, he's also having an online interactive training session of Hebrew language and Torah Studies with a number of foreign students in 6 different countries which includes the United States, England, China, Uganda, Rwanda, and Dominica Republic.

Hezekiah is also the Director of Information and Publicity in IPJD (Initiative for Progressive Judaism Development) organization in Nigeria.

The Purpose of the Tour

Strengthening the Judaism network in Eastern Nigeria has become a fruitful mission embarked by Tikvat Israel Synagogue Abuja since the middle of last year. The movement was started by Sar Habakkuk’s tour around Anambra State with the Sefar Torah. Then followed by Professor William Miles visit to Avishai Synagogue Nkpor and other Jewish centers in Eastern Nigeria; extending across the border into Yaounde in Cameron to connect with other Jewish faithfuls.

Speaking with Hezekiah concerning his recent trip, he told me that the purpose of the teaching tour was basically to extend information about Jewish principles to more people out there. This was accomplished using books, discussion classes, and a laptop to impact knowledge to the audience.

Another important reason for the tour is to discover and connect with more Jewish synagogues beyond Anambra state. Because it’s on record that more Jewish synagogues are springing up mostly in the East and Southern states of the country. It’s therefore necessary to meet with them, identify their problems and challenges, share their views, teach them more, and eventually put them on the right direction.

A total number of 15 synagogues were visited in the 6 states mentioned above. The following are the names of the synagogues: 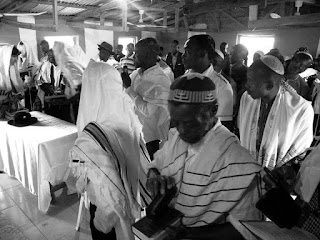 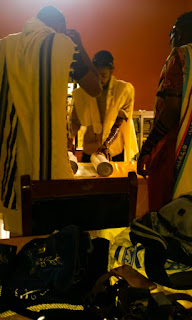 The Impact of the Tour So Far

Bringing the Jews together to be united in one course was demonstrated during the period of the tour. In Ebonyi State, there was a combined service bringing members from different synagogues together. The same thing happened in Yesharim Synagogue in Port Harcourt (Rivers State). It was also a combined service with representatives from different synagogues making the occasion worth awhile. Copies of the Tanakh donated by Rabbi Gorin were distributed by Hezekiah to the various synagogues in attendance.

Generally, people are becoming more informed now, seeing Judaism as more of a community thing and not just a one-man approach as the case may be. The interest of togetherness to become stronger as one big community is also on the increase. Most of the people who benefited from the teaching tour have been calling to show their gratitude and appreciations as they look forward to the next phase of the program.

The Next Phase of the Tour

The next phase of the teaching tour is designed to be more intensive, instructive, and technical. Most of the teachings will be carried out using the support of electronic gadgets, speakers, access to the internet, etc. It’s anticipated to kick off before November once the budget for the entire logistics is successfully released for the purpose of the tour.

The schedule involves re-visiting all the synagogues touched earlier on, for more comprehensive teachings on Jewish Halakah and making more impact especially on the younger children. Extending the teaching tour to synagogues in Imo and Abia state will be a great achievement for Tikvat Israel Synagogue Abuja; haven touched all the Igbo states in Nigeria and going beyond.

What Do You Have to Say to the Management of Kulanu for sponsoring the Tour?

Kulanu has been true to their words according to Hezekiah- through reaching out and touching various Jewish congregations across the globe in different ways. The funding for the trip was donated by the management of Kulanu and this is highly appreciated. The whole push is ultimately towards uniting the Jews and establishing Jewish communities in every African country.

He continued by appreciating the management of Kulanu for their recent support geared towards assisting financially in the completion of a Jewish Study center in Ahavat Tzion Synagogue Lagos. The popularity of Kulanu has continued to grow in this part of the world with majority of the synagogues acknowledging certain degree of support or outreach from the Organization of Kulanu.

Challenges Faced During the Tour

According to Hezekiah, no task ever seems easy; but baruk Hashem at the end of the first phase of the teaching tour- the impact has been tremendous as well as the lessons learned.

Most of the challenges faced during the tour was mostly on the travel logistics and limited budget to reach more synagogues in Nigeria.

The Most Memorable Thing that Happened During the Tour

This happened in a Messianic Synagogue in Nnewi according to Hezekiah- something he would never forget. After spending over 3 hours talking to the Messianic congregation who do not wear shoes inside the surroundings of the synagogue, something extraordinary happened. The members (numbered about 70 people) reacted positively and moved out in their numbers, wore their foot wears, and boldly matched back into the synagogue building for the conclusion of the service.

It seems truly like a miracle to see people change instantly from an old tradition to embrace the new truth according to Hezekiah. The argument that triggered the change of mentality is the fact there’s no specific law of Hashem which mandated worshipers to appear bare-footed in the place of gathering to honour the Holy one of Israel.

Finally, What Do You Intend to Achieve in the Coming Months

The most important thing is to build on the momentum of the first phase of the tour and continue reaching out to other synagogue to foster unity and solid corporation among the Nigerian Jews. The second phase of the teaching tour will capitalize on the gains of the former, offering practical and instant benefits to the target audience and prospective students.

He ended by stating his desire to create an online website for Tikvat Israel Synagogue Abuja- using it to fully propagate Judaism in Nigeria and housing the biggest online directory of Jewish Synagogues, both existing and the newer ones all over the country.

Thank you for taking the time to talk to us. How impressed to see you making more impact nationwide and positioning yourself for the greater leadership task of tomorrow.

May the peace of Hashem dwell with everyone.

Other Posts:
ACKNOWLEDGING RABBI GORIN FOR HIS SELFLESS CONTRIBUTION TO PROPEL THE JUDAISM NETWORK IN NIGERIA