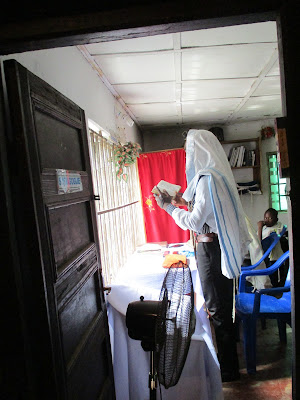 The trip to Awka (the Capital of Anambra State) got underway few hours after midday. It was Day 4 of the tour around Anambra State by Professor William Miles, in the company of Sar Habakkuk Nwafor. It was a great weather when we left Nnewi, completely different from the hazy harmattan usually experienced around this time every year. However, since it’ll be a three days visit, we had to carry extra luggage behind the truck; and completed the road trip in about 40 minutes.

Arriving in the beautiful capital of Anambra state, we made the first stop at the home of Ami Chukwuma, the Rosh of Torah-Haqadosh Jewish Congregation in Awka. Then we took a walk less than a mile to the new Synagogue building under construction. Interestingly, the building had four entrances designated for specific purposes:

.One for the men to enter into the place of worship,

· Another for the women,

· One for the late comers and children, then

· A central door leading to the backside of the building.

A Brief Meeting with the Rosh

Back at the residence of the Rosh, we learned that he had embraced Judaism about eight years ago. As a retired military officer, who once served under the Nigerian Army, and also fought alongside his Igbo brothers during the Biafran war- he recounted the bitter stories in the past. The aftermath of the 30 months war included destruction of properties and the death of millions of Igbos, through hunger and starvation as a result of food shortages and economic blockade by the government. Sadly, till date, the Igbos continue to face intimidation and have not been fully integrated back into the system. Hence the reason for the occasional agitation witnessed in most part of south/eastern region.

We were treated to a delicious meal by the Rosh’s wife, which we took in a hurry as the Shabbat was fast approaching, then continued to the next location in Awka.

Ushering in the Shabbat with Rosh Daniel Okolie

Beth Shalom Synagogue is presumably the biggest Jewish place of worship around the Awka metropolis. With a few brothers present that evening, we ushered in the Shabbat, all filled with smiles and excitement, then proceeded to break bread (Khala) and drink wine, before returning back to our hotel rooms on foot.

The following day, over a hundred people gathered inside the synagogue to observe the Shabbat according to how Hashem has commanded. The service was conducted entirely in the Hebrew language, led by two young Kazan (one of them is the son of the Rosh). When the Rosh took the stage, he announced the presence of the visiting professor from the United States, and the congregation chorused a resounding welcome. It was indeed a joyful and memorable service- one that’ll not be forgotten in a hurry. The young Jewish children were also magnificent as their sweet voices echoed loudly when singing songs in Hebrew. After the reading of the weekly parashah taken from the Torah, in English language, the morning service ended a few minutes before noon, since there was no Sefer Torah.

Discussing the Weekly Torah in the Synagogue

At about 4pm, everybody assembled back in the synagogue for the discussion of the weekly Torah reading. Seated around in a circle, the Rosh led the discussion and answered a couple of questions from the story of Joseph’s reunion with his brothers after being sold into slavery out of jealousy. When the visiting guest was given the chance to speak, he used the opportunity to deliver the message from his Rabbi in America. He presented the following gift items to the synagogue on behalf of Rabbi Franklin:
At the end of this interesting discussion, then it was time to carry on with the rest of the service. Next was the Minchah prayers, then followed shortly by the evening Maariv prayers; bringing the long day closer to its end.

The younger children again displayed their wonderful voices during the Havdalah service, to mark the end of the shabbath and user in the new week. After this, there was a brief moment of singing and dancing in circles at the middle of the synagogue by some very-happy members. Then it was time for group photographs to remember the visit of Professor William Miles to Beth Shalom Knesset in Awka.

This report will not be complete without mentioning the hospitality of the host, in the person of Mr. Daniel Okolie, a renowned top State Government personnel and the Rosh of the synagogue. He’s the president of the Nigerian Jewish Association, a position he has held for over seven years. Truly, this is an indication of his great qualities as a leader, both in the synagogue and at the place of work.

He is full of smiles, blessed with a perfect communication skills, and above all reads the Hebrew language fluently- hence an inspiration to the younger children. His generosity was in full display, taking proper care of the visiting guests, in the areas of transportation, accommodation, and feeding, throughout the 3 days visit.

THE VISIT OF PROFESSOR WILLIAM MILES TO AVISHAI SYNAGOGUE IN NKPOR


The next stop for the traveling team was the Avishai synagogue located in Nkpor area of Anambra state. It was a beautiful Thursday, and the schedule for the day involved the visit to two synagogues; bringing the total number of Jewish place of worship visited to four (4) on the second day of the tour to Eastern Nigerian.

The remarkable thing about the Avishai synagogue is that it is located on the topmost floor of a 4-storey building. From the spot of ablution, one will be amazed to behold the spectacular aerial view of hundreds of tall buildings spanning across as far as the eyes can see. The other time Sar Habakkuk was here, he came with the Sefer Torah during a Bar Mitzvah celebration in June 2017. But this time, he was accompanied by Professor Miles to meet with members of the synagogue.

The prayer session in Hebrew language was ongoing when they arrived. Two kazan (Shmuel Ben Iddo and Nathan Ben Levi) led the prayers in front of the congregation. Shortly after the prayers, it was time for an interaction session with the visiting Jewish  Professor.

The meeting started with introduction of every person in attendance, including the men, woman, youth and Children. Initially, everyone was asked to write down their names in an attendance list. There were representatives from three other synagogues in Anambra state which included the following synagogues:
Breaking of the Kola Nut


According to the tradition among the Igbo people, kola nut is a very important fruit used in several occasions and gatherings. The breaking of the kola is usually performed by the most eldest person around, and the most preferred language used is Igbo.

After the breaking of the kola nut by Sar Habakkuk, it was shared among everyone present, including four Rosh representing their synagogues in the meeting.


Jewish people are truly creative, hardworking, and good in entrepreneurial ventures. The story of Ephrahim is no doubt quite an interesting one. In 2009 when Prof. William Miles left Nigeria after his visit for the celebration of Hannuka in Tikvat Isreal Synagogue Abuja, he received a gift of Tallit sent from Nigeria. It was a 100% locally made Tallit with good quality.

Then, shortly after introducing himself in the meeting at Avishai synagogue, the professor was happy to finally meet the man who made the material. So, since he also brought this Nigerian-made Tallit along with him, he gave Ephrahim the honor to formally present it him in front of everyone. Little did he know that he was going to receive another 100% locally made Tallit from this entrepreneur who has indicated interest and shown the capacity to produce more of these materials, possibly for export to overseas market if given the opportunity.


The focus was centered on the history of Avishai synagogue, Jewish education, and the Holocaust. The Rosh of the synagogue, Emmanuel Ikegbunam Ben Abraham, explained that the Avishai synagogue started many years ago by 10 families who were once in the Messianic faith. Their source of the Hebrew education has primarily been through books, journals, and collective effort among members who are able to read Hebrew to an extent. It was truly amazing to find out that the younger children in the synagogue were also able to recite some prayers in Jewish language as well.


The Rosh went forward to explain the significance of the holocaust, here among the Nigerian Jews and the reason for observing the festival. He compared it with the same fate suffered by the European Jews during the World War II.

The following gifts were presented:


Finally, it was time for some refreshments, and food, and drinks. Everyone were excited at the end, and when we finally climbed downstairs, there was a Range Rover Sports waiting to take Professor Williams to the next location, in the company of the Rosh of the Melek Kevot Synagogue Nnewi.