Significance of the Tour of Eastern Nigeria


After the visit of Professor William Miles to Avishai Synagogue in Nkpor, the next location on our schedule was another synagogue in Nnewi. The tour around Anambra in Eastern Nigeria was getting quite interesting and evident in the degree of rousing welcome the visitors has so far received. Early that morning shortly after sunrise, we drove from the home of Sar Habakkuk in Nnewi to meet with members of Avishai Synagogue (situated on the topmost floor of a 4-storey building in Nkpor). The Rosh, Emmanuel Ikegbunam, received the traveling team and led the way through the stairs into the synagogue to join the prayer session.

The cooperation between Tikvat Israel Synagogue Abuja and Avishai Synagogue has grown over the years. The importance of strengthening the Judaism network in Eastern Nigeria has been demonstrated as a necessary movement that will unite a great number of the Igbos together in one faith. This was why the venture of professor Miles for the first time into the heartland of the Igbo Jews provided the much needed boast and motivation, especially for the younger children who are the future of Judaism in Nigeria. Sar Habakkuk had initially started the “Keruv” by touring over seven synagogues in two states in June 2017, carrying the Sefar Torah along with him. The purpose of the whole visit was to spread the love of Judaism and develop stronger cooperation between the Jews both in Northern Nigeria and in the East beginning from Anambra State.

Gathering of the Rosh from Four Synagogues in Anambra State


They came in quite a number, representing each of their synagogues, accompanied by other members- to be part of this historic visit. Usually, it was mostly the celebration of key Jewish occasions that would bring different Rosh together. But they gathered on that day, being the ‘Day Two’ of the tour, to witness the grand visit of a Jewish professor who is accompanied by Sar Habakkuk, in what seems the continuation of the great tour started in June 2017.


Shortly after the prayer session, it was time to interact with the visitor from the United States and grasp the message he would deliver to the audience. Seated around in circles, and with the women listening from the adjourning room- the meeting got underway. Everybody had to introduce themselves in front of the professor who was full of smiles to get to meet all the people around including the children. The discussion lasted for almost 3 hours, comprising of the following:
Then at the end of this historic gathering being on a Thursday, it was announced that the professor will be keeping the Shabbat at Beth Shalom Knesset in Awka, which is the capital of Anambra State and about 30 minutes drive from Nkpor. 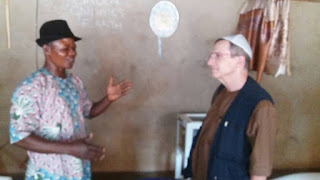 One of the Rosh that took part in the question and answer session was Avraham Benson, where he did explained that the remembrance of the Jewish holocaust yearly festival by the Igbos is mostly because of its similarities to what the Igbos suffered during the time of the Biafran/Nigerian civil war. Rosh Benson is the leader of the 4th synagogues visited during the tour; just shortly after we left the Avishai Synagogue.

Upon arriving at the location led by the Rosh, we learnt that King of Glory Yahudim Assembly is now Melek Kivot Synagogue. The change of name was in line with their effort to enhance the use of Hebrew language and to follow the trend of Jewish naming of synagogues in Eastern Nigeria. Most of the Jewish synagogues in Nigeria are encouraging the learning of Jewish education through history and grammar pronunciation of the Hebrew alphabets.

There was a crowd of people patiently waiting for the arrival of Professor William many hours before we finally drove in through the gates. So, without wasting further time the meeting started in a small hall located by the right side of the compound. As usual, the event began with the introduction segment by calling out the names as recorded in the attendance list. It was truly an honour to get to meet Professor Williams and Sar Habakkuk one-on-one who were seated in front of the crowd during the introduction. Members of the synagogues were all filled with smiles to witness the visit of the Jewish professor for the very first time in Melek Kivot Synagogue Nnewi.

During the interaction session, Rosh Avraham Benson explained that Judaism is the Faith which will unite a greater number of the Igbos together, in an effort to connect back to their original root. He emphasized the need to ensure further cooperation with all the synagogues, in not just Anambra State but throughout the Eastern region. The younger children indeed have a greater role to play in this course, as the future and growth of Judaism depends on the extent of continuity passed down from parents to the children. This is the reason he focuses on looking for creative and easy ways to motivate the younger children in the synagogues to learn the Hebrew language, which would be a compulsory education in Melek Kivot Synagogue. He further stated that the overall target is to ultimately go beyond just the ability to read the letters and words, but to be able to speak, communicate fluently, and write in Hebrew.

A Banquet in Honor of Professor Miles

His visit to Anambra State is truly historic, and one that will not be forgotten in a hurry. Bringing unity, encouraging the Jewish brothers and sisters, and a source of motivation to the youths and younger children- are basically part of the things achieved at the end. Establishing the fact that the Igbo Jews are not alone on this course, but have the support of both the Jews in America and other parts around the globe has nevertheless become a factor that is now strengthening the Judaism network in Nigeria.

In honour of the visitor, we were treated to a banquet held inside the main hall in Melek kivot Synagogue. There was plenty to eat and plenty to drink, and everyone were absolutely happy at the end. Soon, it was time to leave this wonderful and gracious set of people after spending about two hours in their synagogue. We were given a ride all the way back to the home of Sar Habakkuk in Nnewi. The Rosh thanked William Miles and wished him success to continue and conclude the remaining part of the road trip from Abuja to the heartland of the Igbos, and across the border into Yaounde in Cameroon.


Just like all the other synagogues visited, Melek Kivot Synagogue also received a gift from Professor William and Sar Habakkuk. From the former they got the menorah candle stands on behalf of Rabbi Franklin in the United States, and from the latter they received copies of the Jewish prayer books brought to Nigeria by Lucy Steinitz during the Yom Kippur.