According to traditional Judaism, circumcision represents an everlasting covenant between the Jews and the Almighty God, that started from our father Abraham. In Genesis 17: 10 - 14, Abraham was commanded by Hashem to circumcise himself and that this act should be observed by every male among his descendants. The instruction is that every male shall be circumcised in the flesh of their foreskin when they are eight days old. Even the child of your servant(s) or anyone born under your roof ought to be circumcised in the flesh to signify a perpetual covenant, between the holy one of Israel and the people who have been chosen by Him.

The significance of Brit Milah (circumcision ceremony in Hebrew) can be clearly seen, because should the eight day coincide on the day of Shabbath, the ceremony will still be fulfilled without any postponement. The Shabbath day has been set side as a day of solemn rest and worship, but however, Brit Milah being part of the 613 (six hundred and thirteen) laws must be carried out according to the law on the eight day after the birth of the male child. The only reason for the postponement of the celebration may include the following:
Traditional Circumcision in Igbo Custom

The practice of circumcision is not alien to the Igbo people- long before the arrival of religion into west Africa. This had become one of the earliest proofs linking the origin of the Igbo tribes to their Jewish ancestors. It was required that a male child will be circumcised on the eight day after birth, and the act was usually carried out by a trained person. According to the tradition, it's on that day the child will be named, and prayers offered to the gods to keep the child safe and protected from any evil in the world.

Modern researchers and scholars have continued to argue while still asking that ultimate question- how did the early Igbo ancestors come to have almost similar practice of male children circumcision just like the requirements of  typical Israelite.

The Brit Milah ceremony is usually held in the synagogue as the custom demands, though it can also be performed at home or any convenient location chosen by the parent of the child. Recently in 2017, two parents in the synagogue celebrated the Brit Milah of their male child. According to the teaching of the Rabbis who have visited us in the past, this occasion is not just important to the child alone, but to all the grown-up people, both male and females around. It is religiously believed that Hashem will forgive at least half of the accumulated sins of any person present at the venue during the Brit Milah. So, it was certainly a moment of joy to be present to witness this great Jewish ceremony.

The ever first brit milah ceremony to be held in the Tikvat Israel Synagogue is that of Shumuel, first son of elder Baruck. This took place in 2007, and today Shumuel is in line as the next bar mitzvah celebrant in the synagogue in a couple of years to come. 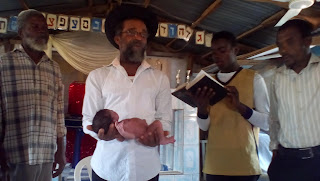 He was born as a twins (a boy and girl) to the family of elder Isaac Npumechi who is the chairman of the synagogue. His elder brother, Chinonso, had his own brit milah some two years before now. On the eight day after the new set of twins were delivered, members of the synagogue gathered in the early hour of the day to be part of this ceremony. Everyone carefully watched as the nurse trained to carryout the procedures according to the Jewish laws, performed the circumcision. The ceremony was conducted in Hebrew language, lead by Emmanuel, one of the chazans, Shortly after it was completed, there was a celebratory meal and drinks to entertained the people around.

The news of his birth was greeted with shouts and jpy after prayers were said by members of the synagogue during the Shabbath on behalf of his mother after she had spent few days in the hospital. On the eight day, according to the Hebrew tradition, the residence of elder Yirmiyahu was chosen as the venue for the brit milah. Sar Habakkuk and few members of the synagogue moved from Kubwa before sunrise to Madala, to join the celebration honouring the words of "Hashem" concerning all Jewish male born.

At the end of the brit milah prayers are usually said for the blessing of the child, and for the parents to raise him in a proper way, so he can grow up to trust in the creator.  Till date, according to the Jewish laws- conversion into Judaism requires that the person must be circumcised. Adult circumcision is now becoming common, although it's usually held in private and done at an agreed date of the one being circumcised.


It's always an honour to observe all that Hashem has commanded us His chosen people to do throughout the generation. The penalty of non-observant of the brit milah is that the person shall be cut off from the people of God, as it is a reproach for an Israelite to be uncircumcised. We are His own, the first-born of the creator, and will continue to strive for perfection, by keeping the commandment so that it will be well with us all.

Celebrating the Hebrew Tradition of "Coming of Age" (Bar and Bat) Mitzvah by the Igbo Jews in Nigeria
Sights and Sounds of the Savuot  Celebration from Abuja, Nigeria
at September 10, 2017