SIGHTS AND SOUND OF THE SHAVUOT 577/78 CELEBRATION FROM ABUJA, NIGERIA.

When the feast of Shavuot was announced by the leader of the Synagogue three weeks before time, the congregation was thrown into excitement about this great feast. It was described as one of the greatest feast given to Israel by Hashem. The feast of Shavuot is held as a generational ceremony to remember the giving of the Torah to the people of Israel. Jews all over the world take part in the celebration of this one-day feast, to observe what was written in the law, and to continue to pass this great event from one generation to the other.

The Tikvat Israel Synagogue in Abuja was not left out in this great celebration, which took place on the 31st day of May 2017 been 6th Sivan. The Shavuot was ushered in on the eve of 30th May, which was on a Tuesday. 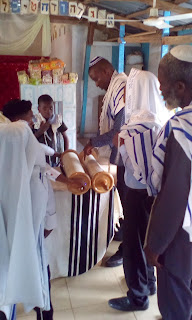 There was plenty to do that evening as the women in the Synagogue gathered to prepare delicious traditional meals, and also baked breads for this great occasion. Just before night fall, the members of the Synagogue started to arrive, each person coming with two loafs of bread, and freshly harvested corn.

The service got underway shortly after the feast was ushered in, as a high day Shabbat, with the Shabbat light glowing right in front of the Synagogue. It was indeed one of those remarkable night, that the Torah was brought out, and opened on a table in front of the congregation. The males gathered around it, led by the chief Chazzan, who read the Bamidbar aloud. The reading lasted for over an hour, making it one of the longest reading time experienced. 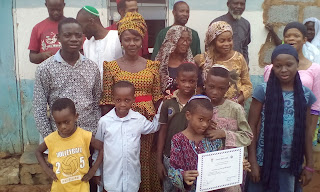 Then, it was meal time, and indeed there was plenty to eat. The children were filled with excitement to experience all that was happening that night. Earlier on, it was announced that there will be a general Torah teaching and discussion, which would likely take place for 6hours. First it looked a bit impossible but as the members gathered inside the hall after the meal, the discussion began. This went on pass the midnight hour till about 4am.

That morning, being a high day Shabbat, the service got underwear by 9am, just like a typical Shabbat occasion, there were prayers, songs, and the reading of the Torah. There was a full attendance in the Synagogue, as a few visitors were also in attendance from other Synagogues.

The height of the occasion was the dedication of a baby girl, (Avielah bath Benjamin ). This part witnessed a traditional dance and singing in native language and Hebrew as well.  The women of the Synagogue accompanied the family of the baby girl to the front of the Synagogue to receive prayers and blessing from the entire congregation. 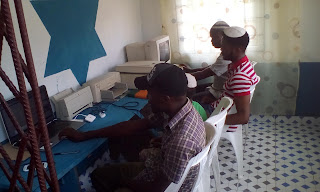 Also, shortly after this, the leader of the Tikvat Israel Synagogue, officially announced the launching of the new internet Café, and thanked the management of Kulanu for their continued support and financial assistance, which brought the Tikvat Israel Café into existence. The high-speed wireless internet connection will allow the synagogue to boost its communication with Jews around the world, and also help to spread the network of Judaism in Nigeria. 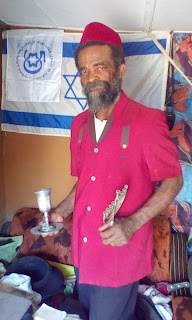 Sar Habakkuk also said, the new café will greatly help to teach the younger children about the use of the computer, and provide a better and efficient way of learning the Hebrew tongue through the use of computer software and application.

The feast of Shavuot has ended, but it’s one feast that will not be easily forgotten in a haste. We give glory and honor to Hashem, and look forward to celebrating the next Shavuot, joining the rest of the Jews around the world in this occasion.